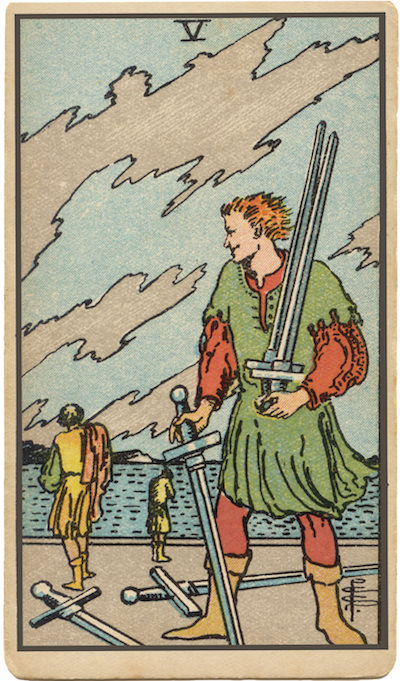 Light: Acting in your own best interest. Choosing to stand up for yourself. Not backing down from disagreement and discord. Taking a stand. Refusing to go along with an unethical plan. Knowing when to bend the rules.

Shadow: Taking advantage of others. Intimidating others. Acting in an unethical manner. Picking fights. Using words to goad others into violence and irrationality. Ignoring rules you’ve agreed to abide by. Looking out for yourself while allowing harm to come to others. Gloating over victory.

Affirmation: “Even as I care for myself, I am mindful of the needs of others.”

Relationships. It’s crazy to think that one person in a relationship deserves more pleasure or power than the other. Balance must be restored. You’re not thinking clearly now, so back off and rethink your approach. Take care of yourself, but try to do so without hurting those you love most.

Work. Occasionally, one person’s success will bring about another person’s loss. When you’re the successful one, don’t gloat; be humble. When you suffer the loss, don’t despair; pick up the pieces and move on. Don’t drive yourself crazy asking “Why?” Breaking a rule may prove to be the key to innovation.

Spirituality. Suffering is a fact of life. How does your spiritual path deal with the reality of suffering or the pain of inequality? It’s easy to be spiritual when all is well. Insulate yourself from instability by thinking—in advance—of how you’ll deal with adversity when it comes your way.

Personal Growth. You can’t win every fight. With this truth in mind, think in terms of how you want to win…and how you want to lose. Rather than be driven by emotion, make conscious choices in both situations. Resolve to be noble in both victory and defeat.

Fortune Telling. Someone is stealing from you, financially or romantically. Be wary of friends who talk behind your back.

The Stolen Swords. Many see the figure in the foreground of RWS-inspired cards as a thief, stealing Swords at the expense of his associates. Just remember: victory achieved through dishonesty robs you of your integrity. Karma is a law; how long before someone steals your Swords?

The Jolly Victor. The victorious knight depicted on many versions of this card is gloating over his triumph. How we act when we win tells a lot about our character. What does your recent behavior say about you?

Unstable Logic. When the instability of the Five combines with the thoughtfulness of the suit of Swords, logic gives way to irrationality. Rules are shattered, and the whole world turns upside down. What would happen if you broke some rules?

The Marseilles Image. Again, a central blade comes to cut down the growth we saw taking root in the Four. The four curved, protective blades remain, but now they are guarding a single decision. How has a protected decision (or sacred cow) influenced your situation today?