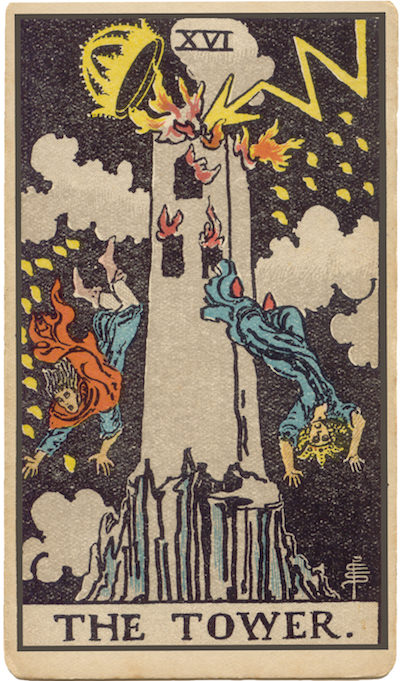 Light: Breaking out of old, confining habits and mindsets. Clearing the way for new growth. Dispelling the influence of an inflated ego. Getting back to basics. Stripping away harmful illusions. Receiving sudden insight.

Mythical/Spiritual: The Tower of Babel. The destruction of Sodom and Gomorrah. Shiva’s destructive dance. The lightning of Zeus and Thor.

Story: In a moment of intense crisis, the main character apparently loses all. Alternatively, the utter setback at the end of act 2.

Relationships. Extinguish old flames before they have an opportunity to dampen promising new relationships. Despite the pain involved, a clean break is healthier than a lingering, drawn-out departure. Break down the walls and communicate honestly about what’s really happening.

Work. Sacrifice some sacred cows. Harsh criticism from above can clear ground for a new breakthrough. Something is blocking progress; identify it and boldly sweep it aside. Document everything; should the climate suddenly change, you want your ducks in a row.

Spirituality. Loss clears away the debris of the past, opening up new ground for new growth. As your heart opens, let old scar tissue fall away. Rather than live in fear of sudden loss, recognize that none of us owns anything. Practice detachment.

Personal Growth. Identify what holds you back and attack it. Embrace bold change. Criticism may come; if so, search each barbed word for a kernel of much-needed truth. Some of life’s greatest lessons are tough ones! With time, a bruised ego can become fertile ground for personal growth and maturity.

Fortune Telling. Impending disaster. Cancel plans and reverse decisions. Someone wants to take you down a notch or two. Don’t hold back; say what you really mean.

The lightning bolt. Many old traditions interpret disasters as divine commentary. A bolt from the blue might not be God knocking at the door, but a sudden change in circumstance may call your attention to a pattern you’ve overlooked.

Darkness. With the exception of early decks (like the Marseilles), many Tower cards depict darkened skies. The moment of disaster is our lowest point. In what ways have you hit bottom?

The toppled crown. The crown in some illustrations represents the ego, or the self. Disasters and sudden challenges often clear the way for us to see ourselves in a new and unexpected light.

Plummeting bodies. Universally, humans fear falling from great heights. Significantly, we fall from grace; exposed criminals “take the fall.” The scapegoat may be called the “fall guy. How might your situation be impacted by someone’s metaphorical fear of falling?