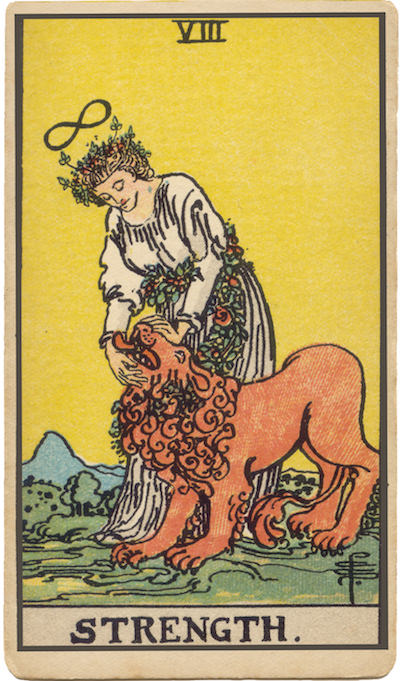 Light: Imposing restrictions on yourself for your own benefit. Bringing your passions under the control of reason. Resisting impulses that work against your best interests. Taking bold action.

Shadow: Indulging weakness, even when you know it will damage your health and happiness. Languishing in addiction. Allowing your instincts to tame and conquer you. Failing to take a stand when necessary.

Relationships. You’re in control. You can’t tame others, but you can rein yourself in. Watch for old habits or weaknesses to surface, and use your wits to avoid upcoming pitfalls.

Work. Emotions and distractions can hinder progress. Identify the cause of dissention and take steps to moderate it. Allow people (including yourself) to do what they do best. An objective perspective yields more effective action.

Spirituality. The spirit is willing, but the flesh is weak. Your own willpower may not be strong enough to resist the temptations that come your way. (That’s okay; you’re human.) Turn challenges over to a higher power, and allow yourself to be led.

Personal Growth. Identify problematic habits and unhealthy tendencies, and weigh their overall impact on your life. Consider, too, the value of leaving these behind for healthier options. A good measure of maturity is the ability to forgo immediate gratification to reap benefits later.

Fortune Telling. Your self-control will be tested. A woman will seek to change her partner or lover. You are a strong, capable person.

The lemniscate. Again, in the Marseilles decks, many see a lemniscate, or infinity symbol, concealed in the brim of the figure’s hat. RWS-inspired decks emphasize the symbol, suggesting infinite self-discipline. What role does self-control play in your situation?

The lion. Generally, the lion (king of beasts) suggests bestial, untamed instincts. Closing the mouth of the lion graphically illustrates the power the central figure has over instinctual forces. What instinctual responses need to be curbed?

Symbols of strength. Some illustrators use Hercules on this card; a gentle woman is more frequently seen, though. What course of action would best symbolize your own moral strength?