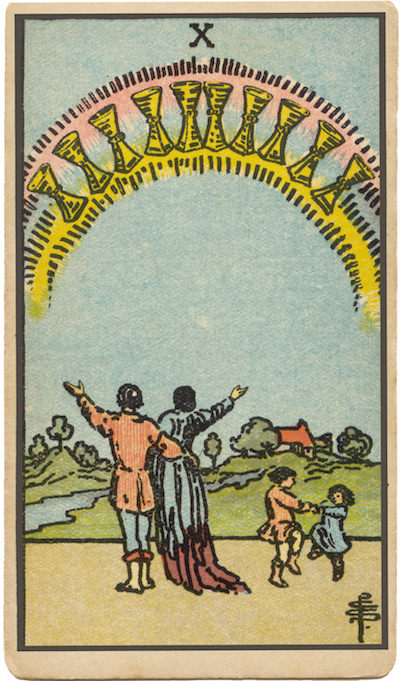 Light: Having more than you ever dreamed. Being deeply thankful for all you’ve been given. Recognizing the Hand of God in the gifts the Universe brings your way. Experiencing transcendent joy. Achieving domestic bliss.

Shadow: Comparing your achievements or relationships to unrealistic fantasy standards. Experiencing emotions so intense they blunt your ability to cope with reality. Feeling overwhelmed. Envying the achievements and happiness of others.

Affirmation: “I take time to appreciate what I’ve been given.”

Story: The Main Character finds himself or herself in a relationship more fulfilling or intense than expected.

Relationships. Having it all may be a matter of perspective. Rather than pursue a fantasy romance, decide what you really want and need. Your relationship doesn’t require anyone else’s stamp of approval. Do what delights you, and be grateful for what you have.

Work. Fulfilling work is rare indeed. Be careful how you define success; don’t get so caught up in reaching the next goal that you forget to celebrate your achievements so far. Feeling overwhelmed? Take time out to count your blessings and realign your work with what matters most.

Spirituality. While we may glimpse nirvana in meditation, maintaining a constant state of bliss may prove to be an unrealistic goal. Delight in the small steps you take along the Path. Don’t be overly concerned with spiritual arrival; enjoy the journey.

Personal Growth. Gratitude enhances success. While celebrating your achievements, remember to give credit to those who helped you achieve it. Overwhelm others with sincere recognition, and you’ll find yourself surrounded by an army of eager supporters.

Fortune Telling. Marriage and family are in the cards. Expect a friendship to blossom into a romance.

When? Between March 11th and March 20th.

The Happy Family. Most RWS-inspired decks depict a joyful couple with dancing children. How do you define family? What makes a group of people a family? How might family play a role in your current situation?

The Rainbow. RWS-inspired decks often place a rainbow at the top of this card. Since Biblical times, rainbows have been symbols of promise. In your situation, what’s been promised? Who has a promise to keep? What will it take to fulfill that promise?

Overabundance of Emotion. Some readers believe tens represent the point at which fullness has been exceeded, and the energy of the suit becomes spoiled and over-extended. Sometimes, emotions spill over, leaving everyone feeling ragged and raw. Might it be time to curb excessive emotions?

The Marseilles Image. Just when you thought a card could contain no more Cups…bam! A huge Cup appears, obliterating the struggling blossoms last seen on the nine. In your own situation, what are the signs that, emotionally, things have gone too far?