From the oversize cards to the hefty “little white book,” from the comic book artwork to the intriguing symbolic details — Tavaglione’s Tarot of the Stars (I Tarocchi delle Stelle) intrigues me years after buying it in 1991.

Have a look at the Five of Wands: 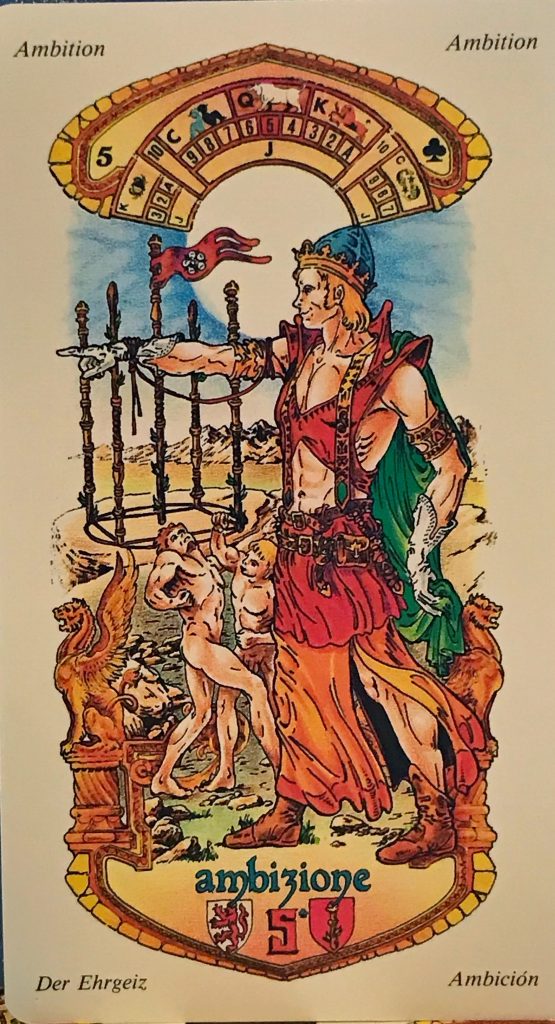 If you’re used to working with variations on Pixie Smith’s iconic “five men battling with rods” image, you’ll find that Tavaglione’s version gives you a lot more symbolic fuel to work with:

I mean, just look at that gorgeous illustration. What do we have?

Don’t get me started. I could go on and on about the symbolism here — and that’s part of the appeal of this magical deck. Thank goodness Dal Negro published it as a pack of oversized cards! (And frankly, even at this size, each card invites careful study, as many touches are simply not apparent at first glance.)

A thick paperback book accompanies the cards, written in an ancient and mysterious language (Italian). Years ago, when Google translate was in its infancy, I started a translation of these notes — more an expression of my passion for this deck than a serious scholarly effort.

I own hundreds of decks, and this one has stood the greatest test of time I know: more than a decade after the purchase, it remains on the shelf by my desk … one of very few decks I keep at arm’s length.

It’s out of print but still around. Several copies are on Amazon.com, but they’re listed between $150 and $200. That’s a steep price, especially since you can still buy new copies from AlidaStore.com for 40 Euro (plus shipping from San Marino).