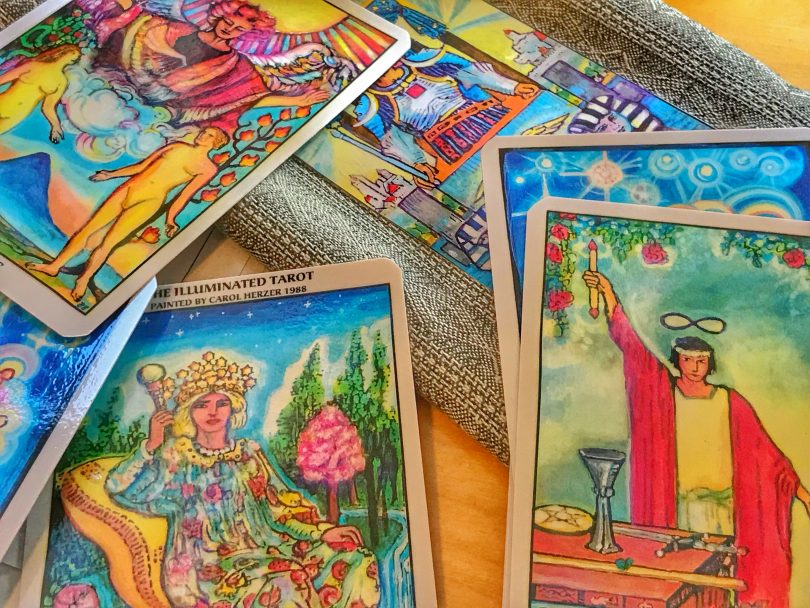 Liquid color and dazzling radiance enhance the appeal of this handmade deck.

Fourteen years after purchasing Carol Herzer’s Illuminated Tarot, the deck remains one of my very favorites.

When I ordered it back in 2003, Carol customized the deck for me, slipping it into a handmade bag. The textured gray fabric on the bag’s exterior echoes the pulsing lines visible in some of the cards. The interior is a black, slick nylon, making removing and replacing the deck a zero-friction affair.

And then — the cards themselves.

Fourteen years later, the iridescent “butterfly wing” paint Carol applied by hand to every card has faded. But the deck’s distinctive swirling, psychedelic waves of color remain, vibrant as ever.

The Illuminated Tarot takes Pixie Smith’s immortal designs and transports them to a world of liquid color. Every scene, from the Fool’s ascent to the King of Coins, is awash in gauzy, prismatic light, as though the sun has been replaced by a multi-chromatic aurora borealis. Stars radiate. Auras flicker. Rainbows abound.

And yet, despite all the neon intensity of certain cards, the deck itself remains sober and dignified. By contrast, the garish colors on U.S. Games’ Radiant Rider-Waite just look like they’re trying too hard — and failing.

I have hundreds of decks in my collection and, unfortunately, very limited display space in my home. As a result, the majority of my decks are sealed in air-tight containers and stored in a climate-controlled storage room four floors down.

But Carol’s Illuminated Tarot has never once been relegated to storage. From the first day I owned it, it’s been on the shelf, just an arm’s length away. It’s that precious to me.

It made me very happy to see that Carol is still selling these handmade decks at her SoulGuidance.com website. Because they’re handmade works of art, they’re price accordingly — but these are a good investment and will likely hold your affections long after most mass produced decks will lose their appeal.