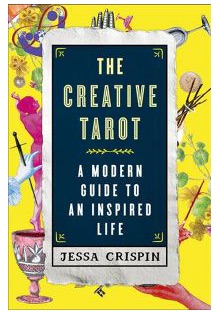 I’d have liked a book more focused on applications than card meanings.

If you’ve ever wanted a beginner-level Tarot book with card meanings specifically tuned to address the work of artists, then Jessa Crispin’s The Creative Tarot is the book you’ve been waiting for.

So: I’m all for books that outline special applications of the cards for specific audiences. And that’s what the bulk of The Creative Tarot (perhaps more properly titled Tarot for Creatives) does — it relates traditional card meanings to the work and challenges of artists. Following a brief history of Tarot (that quotes, thank goodness, Robert Place over Eden Grey) and a glimpse of the author’s own Tarot journey, you’ll find an artist-focused card commentary for every card in the RWS deck, plus a small selection of spreads.

The Magician, then, becomes a card about becoming a conduit for divine inspiration (and transmuting material created by others, as Shakespeare did, into something so powerful no one cares about the theft). The High Priestess reminds the artist that there comes a time to set aside the work, unroll that scroll, and study. Death prompts us to say goodbye to ways we used to work or live, and the Devil warns against addiction and obsession.

The commentary on each card concludes with a short list of books, movies, or paintings to explore: for the Magician, Shakespeare’s The Tempest or the paintings of Hilma af Klint; for the Priestess, Silvina Ocampo’s The Topless Tower or Blake’s The Great Red Dragon and the Woman Clothed with the Sun; and for Death, John Everett Millais’ painting of Ophelia.

If you’re an artist with a curiosity about Tarot as a tool for creatives, you could do far worse than this book. (Or you might consider digging up a copy of the William Blake Tarot of the Creative Imagination and companion book.)

Ultimately, though, what makes The Creative Tarot remarkable is its trajectory in the publishing world. I mean, here’s a beginner-level Tarot book written by a first-time Tarot book author completely outside the Tarot community, snapped up by Touchstone/Simon & Schuster, ushered instantly to the top of the best seller charts (at least, in the Tarot category) at Amazon.com, and fawned over in The New Yorker, of all places.

It’s a great example of how having the right platform — Ms. Crispin is the founder and editor at Bookslut and author of the well-received Dead Ladies Project — can make all the difference in how work is received. There’s artistry at work here — in the writing, yes, but also in the careful and deliberate creation of a platform primed to sell, promote, and launch a niche-interest book into the mainstream. Every Tarot book author would do well to learn from The Creative Tarot — perhaps less from the book’s contents than from the strategy that guided its release.

If you’re intrigued, Ms. Crispin is creating a Tarot deck of her own and offering readings over Skype for $120 per hour. I wish her nothing but the very best.