How to Create Characters (and Stories) with the Character Generation Tool

A reader asks, “I love the idea of your Character Generation Template, but have trouble understanding exactly how it works. Can you provide an example of how you’d use it to generate a character from scratch?”

I’m happy to! Tuck in, grab your favorite deck, and prepare to play along!

After shuffling my trusty Rider-Waite-Smith deck, I pulled eight cards and went to work! 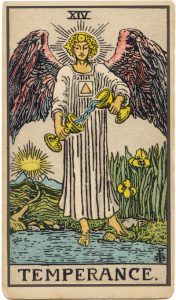 I’ll go with the first things that pop into my head. The curly mop of golden hair on top of the Temperance Angel’s head makes me decide to give my main character an unruly mop of curly blonde hair. The wings, for some reason, make me think of a pilot, so I decide this character will always wear a leather flight jacket. (In the back of my mind, a voice whispered: “Inherited from his father.” I’ll hang on to that.) And the water flowing from the two cups in the angel’s hands makes me think of bar tending.

So — out of nowhere — here’s this guy: a beautiful, golden-haired fellow with curly blonde hair, wearing his father’s leather bomber jacket and tending bar. 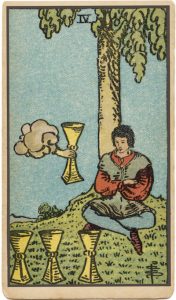 When I see the Four of Cups, I think “boredom.” But how can boredom suggest age? I go with the first thing that pops into my mind. This guy’s in his early thirties. He’s been tending bar a long time at this high-energy dance club. He’s still good-looking, still passes for much younger than he really is. But as the club kids get younger and younger, he has less and less in common with them. He’s still smiling and performing, but the smiles, increasingly, are part of a mask. He knows it’s time to move on, but has no idea what to do next. 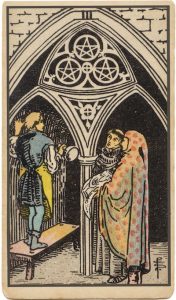 The first thing to pop into my head is this: he carries a lucky coin, that he flips absent-mindedly while he makes his mind up about things. Maybe that coin comes from his father, too. Oooh! In fact, maybe the jacket and the coin are all he has left of his father, who disappeared while flying a mission overseas. 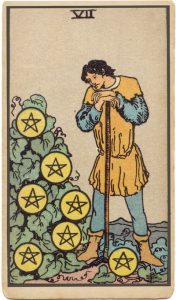 I look at the coins and the longing on this character’s face, and, for some reason, I see the six coins (still on the vine) as past investments that didn’t pay off … and the one coin (at the character’s feet) as the one investment that did. It occurs to me that he’s been playing the lottery for years … and that, tonight, his winning number is coming up.

But then, for some reason, this twist doesn’t appeal to me. I look at the card some more, and decide on a different backstory: this guy’s spent every dime he has. His go-nowhere job pays very little, and since he only gets paid every other week, he’s flat broke tonight — except for his lucky coin, of course. 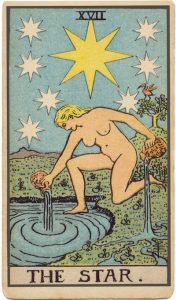 Okay, first, I get a little distracted by Pam Smith’s stunning artwork for this card. But then, one of Tarot’s little “in jokes” catches my eye: here’s another character with a vessel of some kind in each hand. This time, though, instead of being poured from hand to hand, the water’s being poured out.

I also have this in mind: this card, the Primary Strength, will also help me define the Story Problem. In other words: whatever my character’s Primary Strength is, that’s going to be the exact quality needed to solve the crisis faced at the end of the story — an arrangement which, very naturally, equips my character to be the hero of this particular tale, right?

I associate The Star with openness and a willingness to be led. About the time I’m thinking of those themes, out of nowhere, a mental image pops into my head: this guy flipping that coin … and walking out of the bar.

And, of course, that’s just the beginning. As the author, I know that somewhere in the future, there’s a story crisis related to this guy’s strength: a moment when a willingness to be led, to read the signs, and to trust life to random chance instead of logic saves the day. I don’t yet know what that challenge is — taking a leap of faith? refusing to listen to a reasonable argument to turn back? — but I know this character’s already got what it takes to solve that problem. 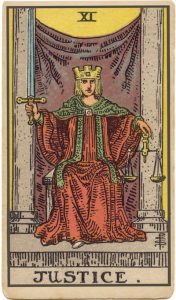 The critical flaw impedes progress toward the goal, hindering the main character’s progress and enhancing tension by adding resistance. So: what kinds of critical flaws might be suggested by Justice?

Maybe this guy has a criminal record, and the cops are after him. Or maybe — and I like this better — he’s someone who has always played by the rules, done everything by the book, and kept his wild side reigned in. His dedication to always doing what’s right will make him resist doing some of the crazier things the flip of a coin directs him to do. 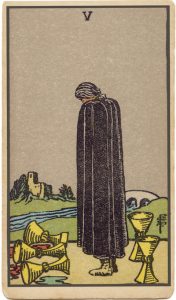 Somehow, everything my character needs to be motivated by the quality or incident suggested by this card. When I see the Five of Cups, I think of the keyword, “Loss.” I’m taken back to a detail that popped out earlier in this exercise: the idea that the jacket and the coin both belonged to the main character’s father — a pilot who disappeared, and whose death was never resolved.

Out of nowhere, another scene pops into my head. After a crazy day of doing what the coin dictates, our hero — battered, nauseous, a little drunk, but satisfied — stumbles into the apartment he’ll be kicked out of in three days. He hangs his jacket on a peg and collapses onto his lonesome bed. The light coming through the blinds creates a pattern of lines on the ceiling, and those lines draw his eye back to his father’s jacket.

He hesitates. He fishes the coin out of his pocket. “Should I go looking for my father?”

He flips the coin. He catches it. It takes him a long time to look at the answer.

Oh, man. Did you feel Act Two click into place just then? Guided by answers from the coin, our hero is headed off to find out what happened to Dad! 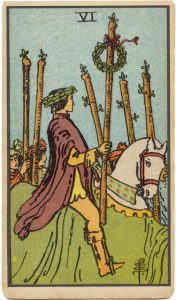 This card, the Six of Wands, gives me one last, critical piece of my character’s personality — how he reacts when faced with  a problem.

This card always reminds me of a war hero returning to a triumphal parade; when I see it, I’m always reminded of the keyword, “Victory.” But how can “being victorious” be a problem solving style? And then it hits me: when faced with a challenge, this guy doesn’t take any risks. If he thinks there’s any doubt that he can win … he just walks away.

There are a lot of ways we could illustrate that. Maybe a perfect girl flirts with him, but he fails to follow up because he thinks he’s out of her league. Perhaps, during a chase scene, there’s a gap between buildings he doesn’t think he can jump, so he hesitates. Maybe after visiting a seedy bar, there’s a group of guys who want to fight, and, after estimating the odds, he wants to back off.

You know where this is going, don’t you? Each time he flips the coin, its advice clashes with his default problem solving style — so he’s forced to go talk to the girl (who becomes an ally), make the jump (which almost kills him, but helps him find a clue to his dad’s whereabouts), and fight those thugs (who thrash him … but dump him in an ally where he finds another clue to his Dad’s mysterious disappearance).

So: after just ten minutes’ work, what do I have? A handsome, blonde-haired hero … a good, law-abiding guy, who’s bored with his job, down on his luck, and too old to keep tending bar at the trendy dance club. His only possessions of any value? The jacket and coin his father left behind. Weary of playing by the rules and always feeling defeated, he decides on a whim to entrust his life to random luck. (After all, he thinks, how could life be any worse?)

After letting the coin decide what he’ll do, he quits his job, eats some bad food, gets into a dramatic chase, and gets beaten up — but, for the first time in his life he feels alive. But it’s when he asks, “Should I go find out what happened to my father?” that the adventure really begins.

Is this a character I’d normally write? No. Is this the kind of storyline I normally come up with? No.

But is this a viable, interesting character with a storyline that seems to have potential? Someone I’d want to spend time with? Someone I’d be willing to hang out with for 70,000 words or so, just to find out what happens to him?

And that’s the magic of this little template: it disrupts your habits, escapes your expectations, and provides you with fully fleshed-out characters who have the seeds of fantastic stories all bound up inside them.

Why not download the TarotTools Character Generator and create a few characters of  your own today?